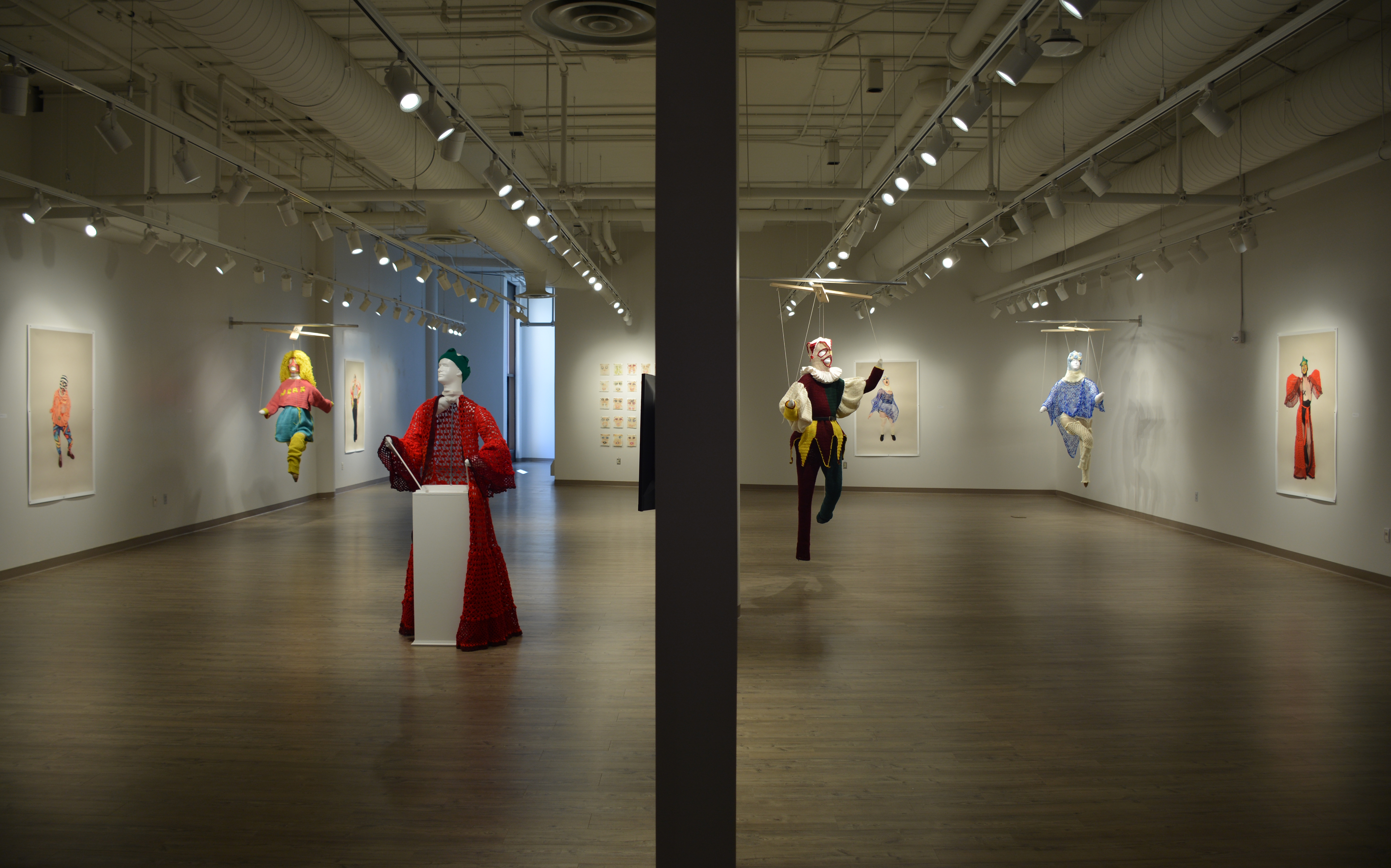 Stockings are hung to dry. Mysterious pots of oils and goodies line every surface. Maybe someone passes around a bottle to nip at while a warm rush of voices and low hum of music enter the room. Is it the beginning of an East Coast kitchen party or the dressing room of a drag club? Either way, the show’s about to start.

In The Queer Mummer, the worlds of drag and mummery merge in this exhibition by Corner Brook-born artist Lucas Morneau. Creating a troupe of tongue-in-cheek characters, Morneau explores the various masks worn and roles performed in the construction and expression of regional identities, both queer and traditionally familiar. The exhibition is made up of costumes and photographs of various characters/drag personalities worn by the artist’s persona, The Queer Mummer. The handmade garments, campy and crocheted, clothe mannequins that are suspended like marionettes, complete with strings and large cross-shaped handles ready for a giant hand to jump them into action. They are paired with a life-size photograph of Morneau in said costumes, posing seductively and flamboyantly as each character. Accessories worn by the Queer Mummer range from a jester cap balaclava, a knit yellow wig, and a mop-turned-mummer’s-instrument covered by a hilariously huge, knitted prophylactic. Certain characters are brought to life in daytime tv instructional videos where The Queer Mummer details DIY drag and extremely low-impact calisthenics, legs spread wide over the St. John’s harbour. One gallery wall is filled with a series of wet wipes imprinted with the makeup of each character, leaving behind slightly smeared cosmetic masks. 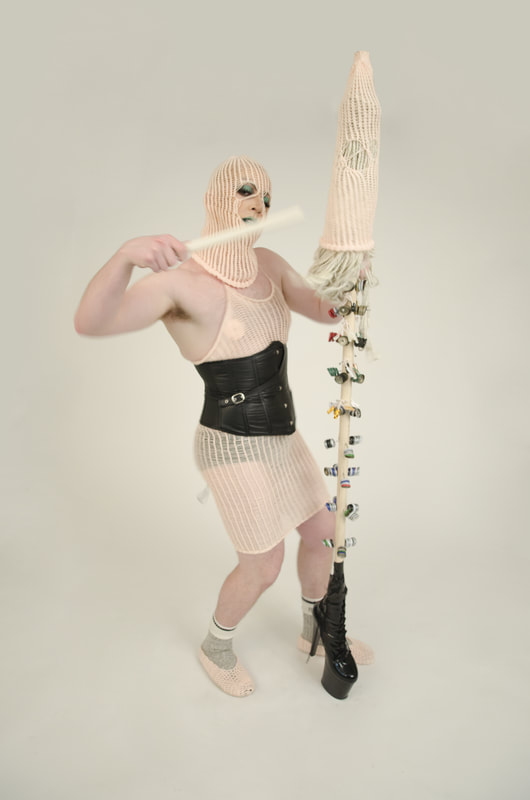 The tradition of masking, whether the literal covering of the face with an object or the alteration of one’s features with dramatic stage makeup, is at home in performing arts practices, including both mummering and drag. Mummery is a folk tradition best known in Newfoundland, where community members disguise themselves in layers of old dresses, jackets, and pillow-case masks and go door-to-door performing songs and stories anonymously for their neighbours. This hodgepodge of costuming holds a familiarity in Morneau’s work while retrofitting the traditional aesthetic bonded to Newfoundland’s visual identity. The artist’s use of materials is delightfully dotty, like they had enlisted their Nan in the crocheting of every piece. Looks vary from loosely woven shawls and knitted gartered stockings, to bell-sleeved dressing gowns over lingerie and taped “X” nipple pasties. Piles of plaid are quilted together in a scrappy Alexander McQueen look. The DIY and handicraft elements of Morneau’s practice bring to mind the traditional craftwork of women in a place like Newfoundland; the kinds of utilitarian and beautifying objects one might see in rural households, and the skills needed to make them on this remote island. The art of drag can also be considered one where DIY plays a large role. In an artform that demands spectacle and pageantry, performers often need to learn how to skillfully sew, hurriedly glue, or innovatively adapt techniques to create outfits from available materials. As any watcher of “RuPaul’s Drag Race” knows, a queen who enters the competition without seamstress abilities is almost always sent packing. Whether on a stage or on an island (if the two are so very different), crafted creativity is a strength.

The characters in The Queer Mummer have names like “Skeet Burns,” “Fag Hag,” and “Bay Thang,” coined in a marriage of Island-isms and queer/drag vocabulary, blending the two with cheekily placed puns. The vocabulary of drag predominantly comes from Black and Brown queer innovation and is rooted in African American Vernacular English, or AAVE. The dialects of Newfoundland are associated with white settler vernacular heavily influenced by the Irish and English that colonized Ktaqmkuk (the Mi’kmaq name for what is often known as the island of Newfoundland). The wordplay used by Morneau highlights the talent of merging the glamorous with the abject and silly in the creation of drag personas. Morneau knits witty slang, accents, and geographic references with drag lingo to name these characters. Some of this wordplay leans into queer terminology, such as “twink” in “Inky Twinky,” sporting a crochet octopus dress, like The Little Mermaid’s Ursula (a Disney character whose appearance was inspired by drag legend Divine). Names like “Awww Luhhh” are written in accented phonetic. It is a cooing endearment, “aw, look!” As Morneau tells me, used “if you see something cute in the distance”. It’s a sound plucked from a motherly mouth, whether from a beloved island Auntie or the matriarch of a drag family. The distinct and outlandish senses of humour associated with drag and with Newfoundland, respectively, find a harmonious home in Morneau’s work.

In the 1980s song “Any Mummers Allowed In,” Newfoundland band Simani describes a troupe of mummers surprising a grandmother at her door. She sees through their costuming and tries to make out the faces of her neighbours. “Is he wearin’ his mother’s big forty-two bra?” she wonders to herself “I knows but I’m not gonna say,” coyly identifying a villager in drag. So, as Morneau beautifully and hilariously demonstrates, the worlds of drag and mummery are not so disparate. The distance we imagine between the artforms arguably stems from a belief that queer people do not (and have not) come from small communities— or at least that they do not have a home there. But, what Morneau’s exhibition, presented with artful humour, asserts is that queerness is not alien to Newfoundland. While not often acknowledged, queerness is perhaps enmeshed in its most beloved stories, traditions, and characters, even as the artist has fun playing with the subversiveness of this idea. As the drag community of Newfoundland blossoms, including St. John’s drag collective Phlegm Fatales and queen Irma Gerd’s time on the latest season of Canada’s Drag Race, we can imagine a different kind of crowd gathered at back doors and in kitchens, ones where costumes can be worn without masks. 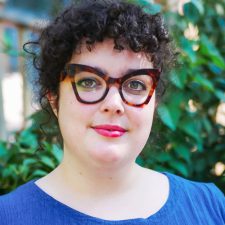 Mollie Cronin is a cartoonist, illustrator, writer, and curator from Kjipuktuk (Halifax, NS). She currently teaches comics classes in NSCAD’s extended studies program and is writing her first graphic novel about a fat punk girl living in a swamp.
Share 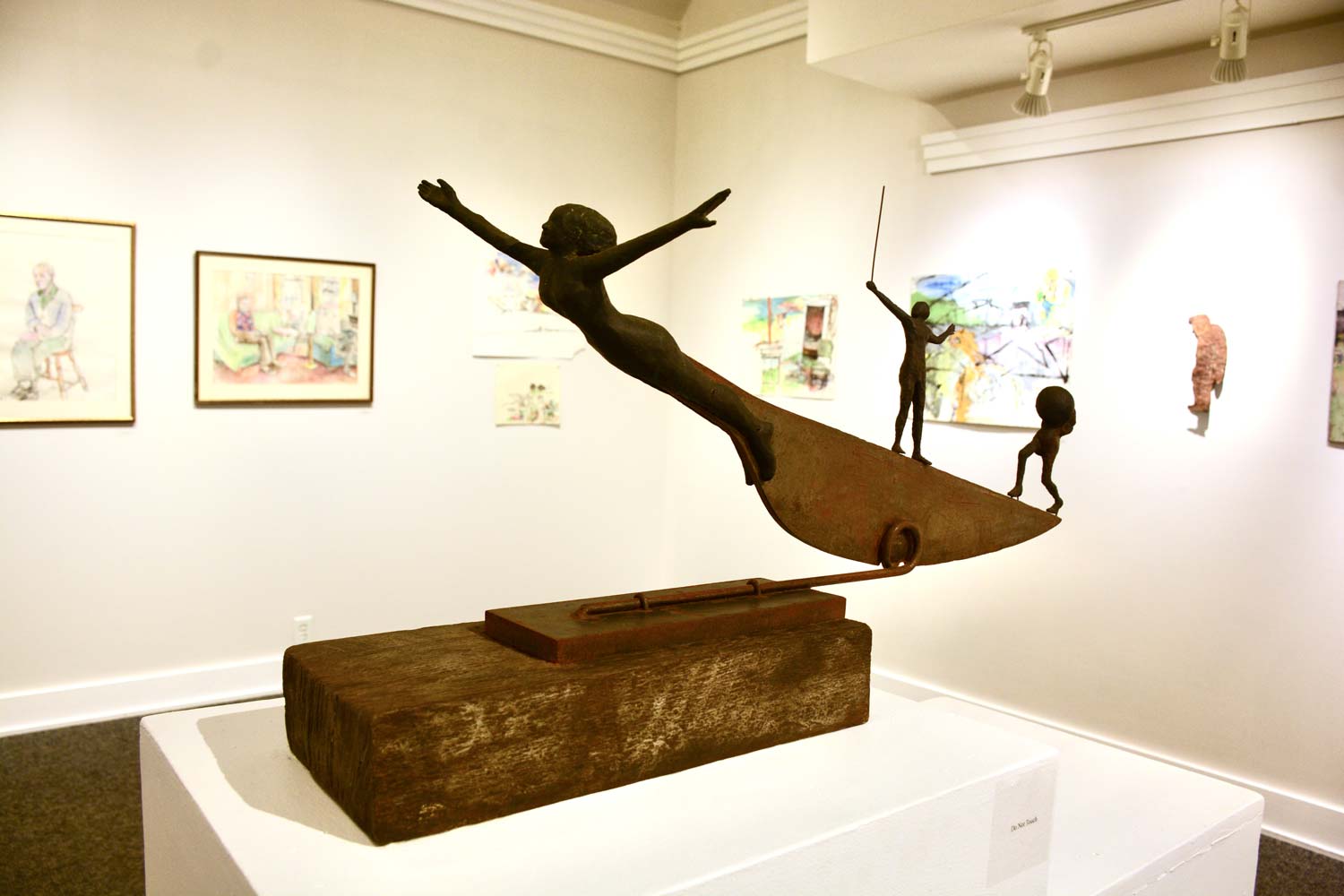 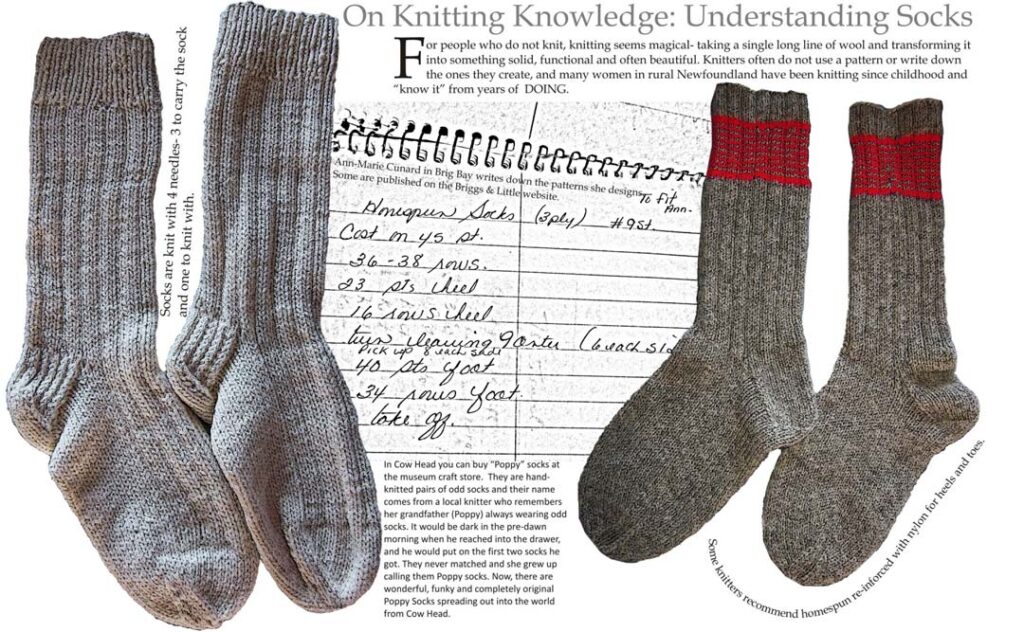 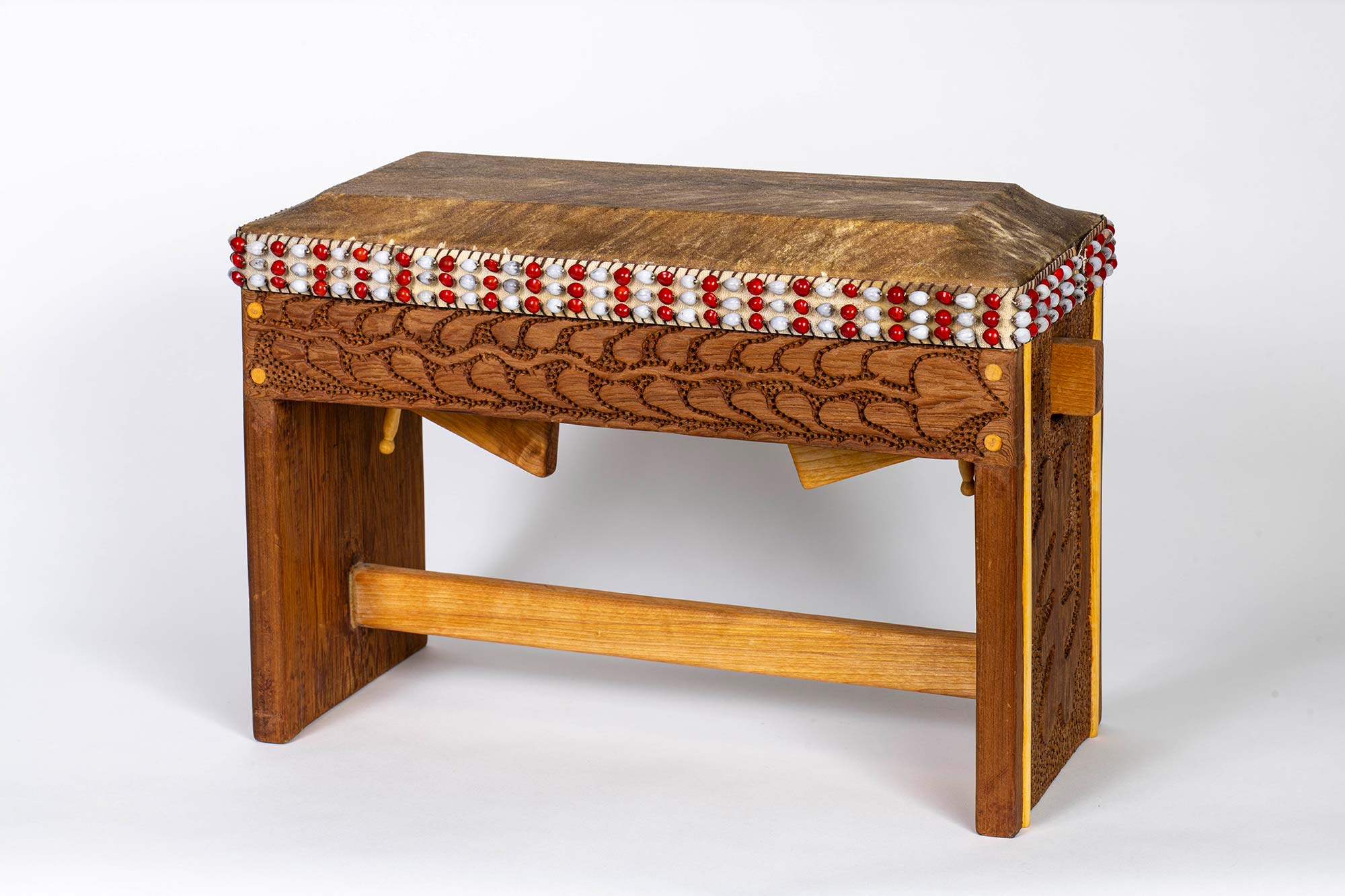 Billie is published on the traditional unceded territory of the Wolastoqiyik and Mi’kmaq Peoples.